Google CTF was put on by (as you might expect) Google in August 2020. I competed with the Texas A&M Cybersecurity club and have included writeups for the challenges I helped solve below.

The attachment provided in the CTF provides us with a "vm.tar.xz". Extracting reveals a disk image (disk.img) and a script which launches a QEMU VM using the disk image (run.sh).

Let's take a look around that disk image.

❯ sudo mount -o loop,offset=1048576 disk.img disk will mount the partition at the "disk" folder in the same directory.

Google provides us with a script to launch it with QEMU, but it needs a password we don't have! We recognised that we would need a root shell on the device, so to do so, we employed multiple tools.

chroot, the obvious first choice, allows us to simply log into the target's mounted folder with just chroot vm. Unfortunately, this doesn't give us systemd or other boot-based services, so it just won't do.

The next step was using systemd-nspawn to start the program at the systemd level. The following commands were used (in different shells):

This gave us a root shell with root privileges, but ultimately we still didn't find that anything significant changed.

Finally, to get root on the device in QEMU, we modified the systemd units using the standard override for getty. This was the access level we used for the rest of the challenge and ended up with how we did all of our live investigation from here.

Hiding in the /etc/shadow?

The first place anyone should think to go to get root access is the "shadow file" in /etc/shadow. This file contains the hashed password of all users in a linux system. In this case, we can get the hashed root password:

Here is a dissection of that hash:

Turns out the hashed password is simply no. A feeling this seemed a bit too easy is quickly justified:

So there is something more than just a password at play here...

Once we have a login on the system, we can use the following script to query Arch's pacman package manager database for any files that are not owned by any packages:

(Credit to graysky on the Arch Forums)

This effectively "diffs" the filesystem against what would otherwise be a vanilla Arch installation. This yielded many auto-generated / user-specified configuration files, SSL certificates, and some particularly interesting files in /usr/ toward the end:

The pam_check.so module was indeed being used in /etc/pam.d/system-auth, which is probably why our attempt to log in with the root password earlier would not work. Let's see what is inside the PAM module and those kernel modules. 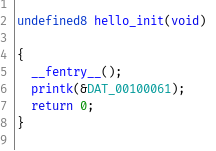 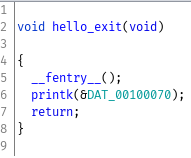 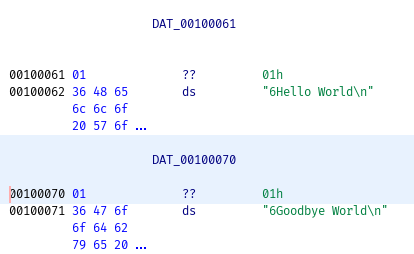 This was a fairly trivial kernel module. It printed "Hello World" and "Goodbye World" to the kernel log. To the best of my knowledge it had nothing to do with the actual challenge but it was an extra file on the disk so we analyzed it.

We run strings on the kernel module, and find that the author is someone working at Google. There is also a mention of acpi in the alias:

We look at the kernel modules in ghidra, and we see that the read function calls a function acpi_evaluate_integer. This function is external and invokes relies on uninitialised data which is likely to be defined in initramfs: 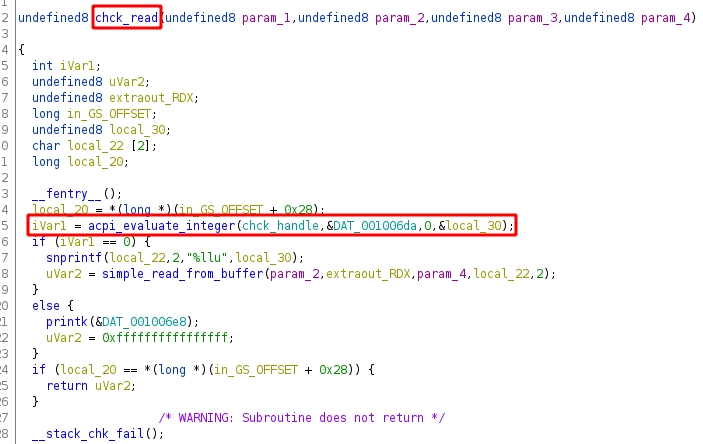 pam_chck.so has four functions, three of which are implementations of a pam interface. pam_setcred, pam_authenticate, and pam_acct_mgmt. We know that the login prompt is seemingly ignoring the root password so pam_authenticate (which controls the login flow) seems like it'll be relevant. 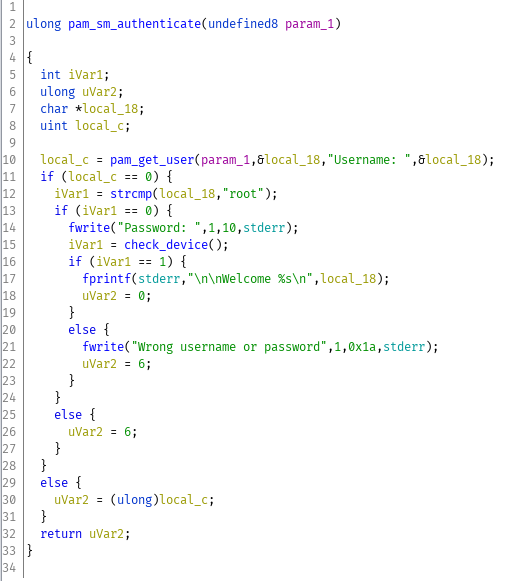 This explains the strange behavior we had noticed earlier with the login prompt. Any account which was not root would fail immediately by querying username again and root would fail with the correct password. It's worth noting that it doesn't read input for the password at all. The check_device function determines if we log in successfully or so, so the next place to look is that function. 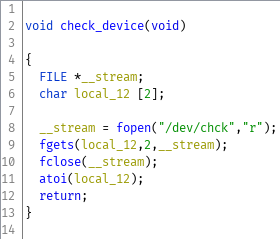 check_device reads two bytes from /dev/chck, converts them into an integer using atoi, and returns it. Looking back at pam_sm_authenticate, if /dev/chck returns a 1 then the login will succeed, otherwise it will fail.

By this point, we had worked out that it was necessary to view the initramfs in order to access the data present in the kernel module (specifically, chck_handle and the call to acpi_evaluate_integer). So, we extracted the initramfs.

Hmm, that's unhelpful. A little google-fu shows us that this is an ACPI Secondary System Description Table, which is used for further providing functionality to devices with ACPI Machine Language. On the AML page, it specifically mentions:

The Intel ASL assembler (iasl) is freely available on many Linux distributions and can convert in either direction between these formats.

I run a variant of Ubuntu, so installing that was as easy as sudo apt install acpica-tools.

Huzzah! Now we can mess around with the .dsl file, the full content of which is available here.

Upon inspecting the DSL file, we find the method used in chck.ko via acpi_evaluate_integer. It's quite long, so I've redacted everything except the most important bit.

KBDA and KBDB are buffers defined above:

It was at this point that two things happen:

So now, we just need to decode the keyboard events into ASCII.

When pressing -- or releasing -- a key on a keyboard (or pressing a button on the mouse), the kernel receives these events in the form of "key codes." The keybd_event repo by @micmonay contains a mapping that gives more meaningful names to the key codes. Decoding the key codes above gives the following sequence of keys:

Wow, there is a lot of extra "junk" buttons being pressed. We can ignore the MSDOS, CALC, NEXTSONG, EJECTCD, etc. events. One pattern of note is the SHIFT event when the shift key is pressed down, and the corresponding ISO event when it is released. This means that the initial C, T, and F are capitalized, LEFTBRACE and RIGHTBRACE are actually curly braces ("{}"), and MINUS is actually an underscore ("_"). Putting all of this together yields the flag:

An early prototype of a contact tracing database is deployed for the developers to test, but is configured with some sensitive data. See if you can extract it.

we are provided a rust source package. A quick scan of the Cargo.toml shows that no dependencies have known vulnerabilities.

A quick grep shows that there are no unsafe keywords which means we are likely looking at a logic error.

We get very little data back from the server. From the note provided with the challenge it seems likely that our flag is stored in the arg UUIDs but we don't have any obvious ways to extract that because we don't get feedback based on how the binary search works out.

We realized that we although we couldn't get any feedback directly, we could perform a timing attack. By constructing a binary tree such that uuids lower than the node hit the end of the tree immediately and uuids higher have to traverse a long tail we can leak which direction the character is in. By performing a binary search (heh) we can narrow this down to the exact byte in 8 connections. This can be done for everything except the last two characters because of how we created the payload. Fortunately, we know that the last character in the flag is a closing bracket and the 2nd to last character was obvious from context.

Running it shows a flag prompt and it says "FAILURE" when I type hello.

The operations are as follows:

pshufb shuffles bytes in a 128-bit register by moving them into the location specified by the second operand.

pxor performs a bitwise xor operation across both operands.

This was our solver script. The careful observer (aka if you executed it) may notice that the flag it gives isn't correct. The solved flag is CTF{S1NEf0rM3!} and the correct flag is CTF{S1MDf0rM3!}. This happened because of a misunderstanding in how the PADDD instruction worked. I assumed a bytewise addition across the registers, but it actually performed four 32-bit additions. Elements 6 and 7 from the add32 array have the most significant bit flipped so they required carrying that couldn't happen on bitwise addition.